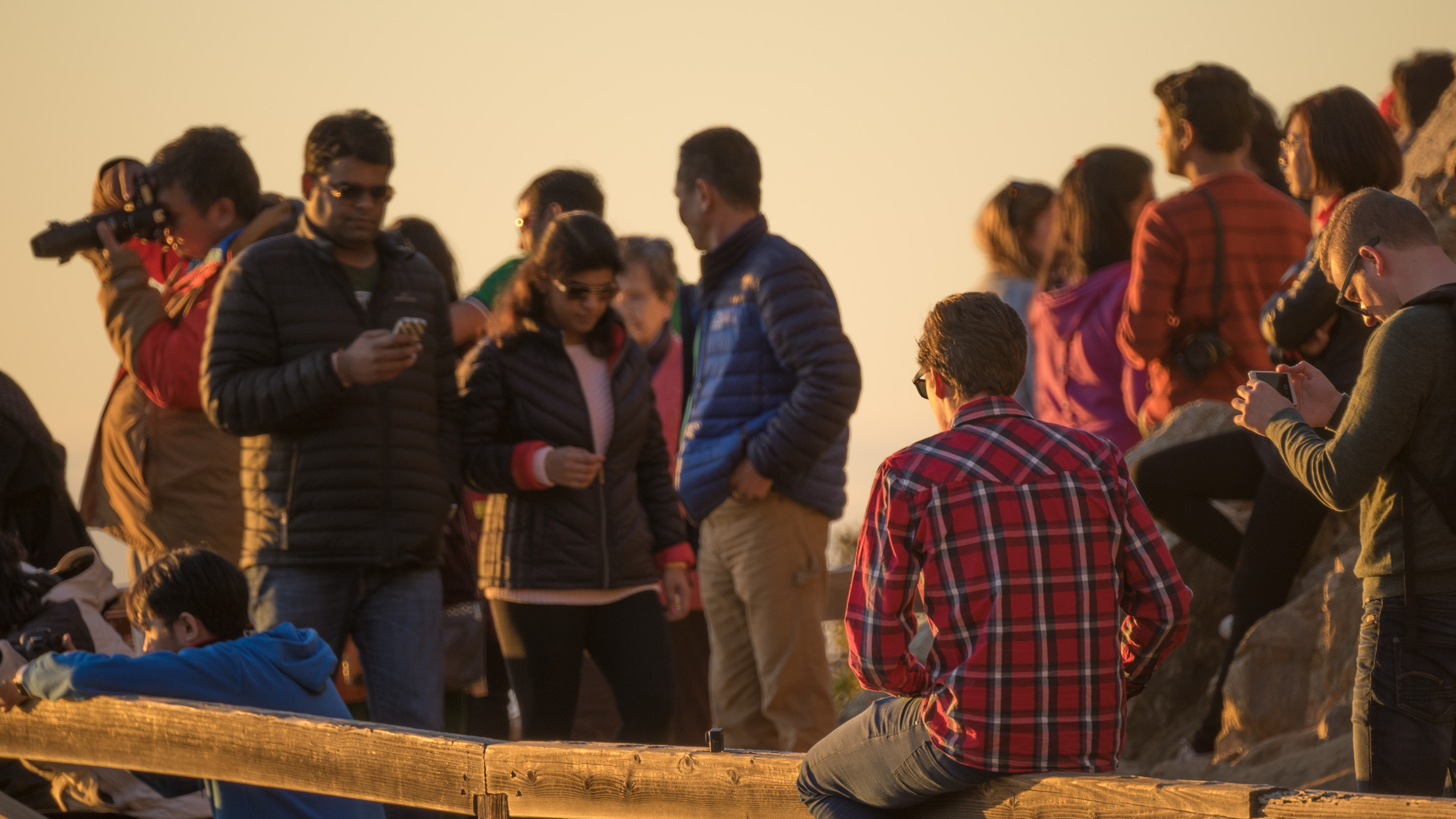 Note: Julia Pfeiffer Burns State Park (where McWay Falls is located) is open, but the trails on the east side of Hwy 1 are closed until further notice because of the 2016 Soberanes Fire. You can updated information about all Big Sur area parks along Hwy 1 here.

“We’ve had two people killed there this year” the ranger said as I was paying for my day pass at Pfeiffer Big Sur.

“One guy climbed over the barrier, cracked his head on the rocks. The other person got hit by a car on the highway. People won’t slow down even with all those parked cars. It’s pretty crazy down there.”

Crazy it is. Crazy with crowds, crazy with parking and… crazy beautiful.

Take a modest ocean cove, upgrade it with Big Sur geology and a white-sand beach, accent the perimeter with small stands of coastal pines for a little balance, and then animate the scene with a liquid play between a delicate 80 foot waterfall and the rolling turquoise Pacific surf. 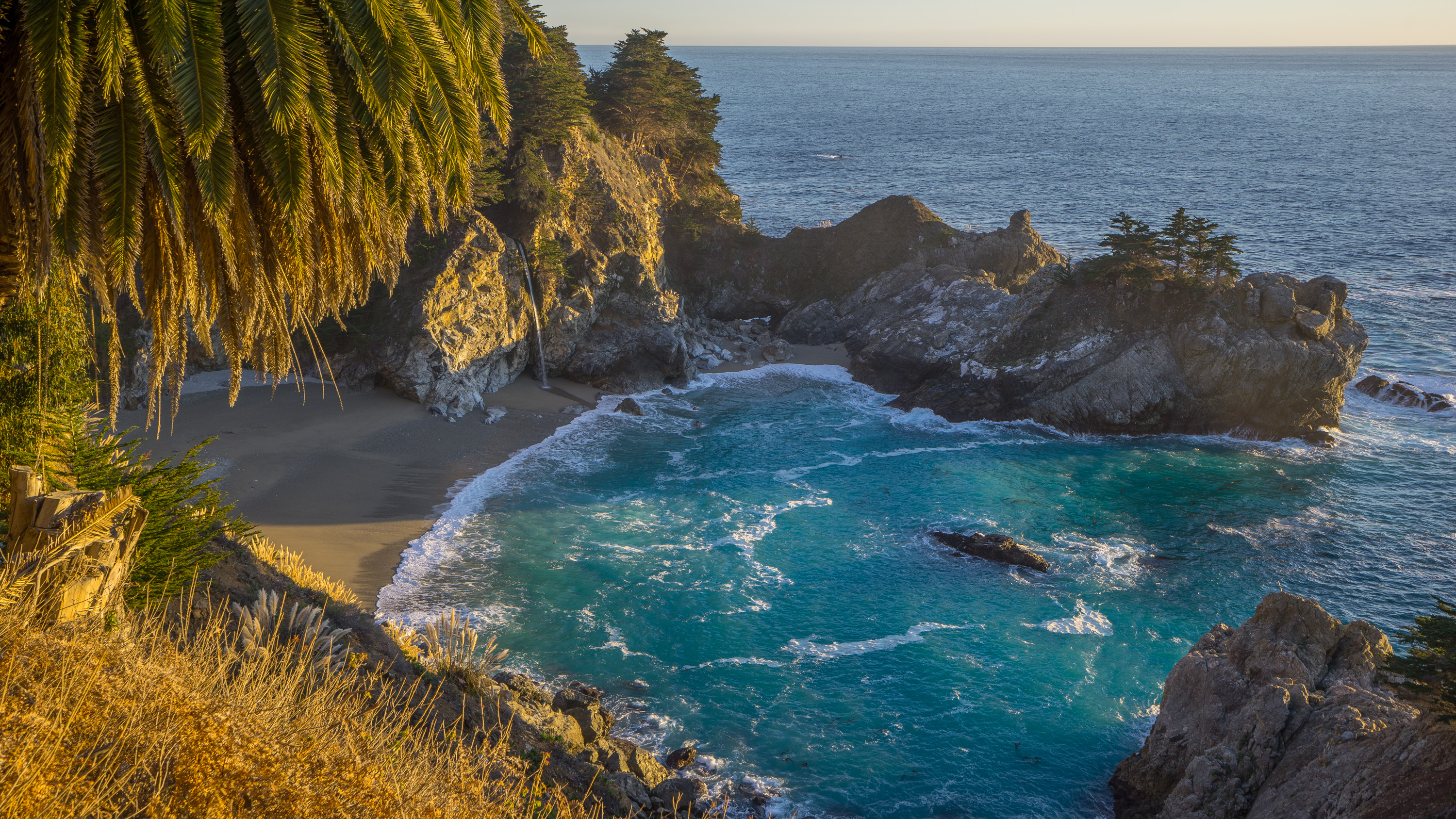 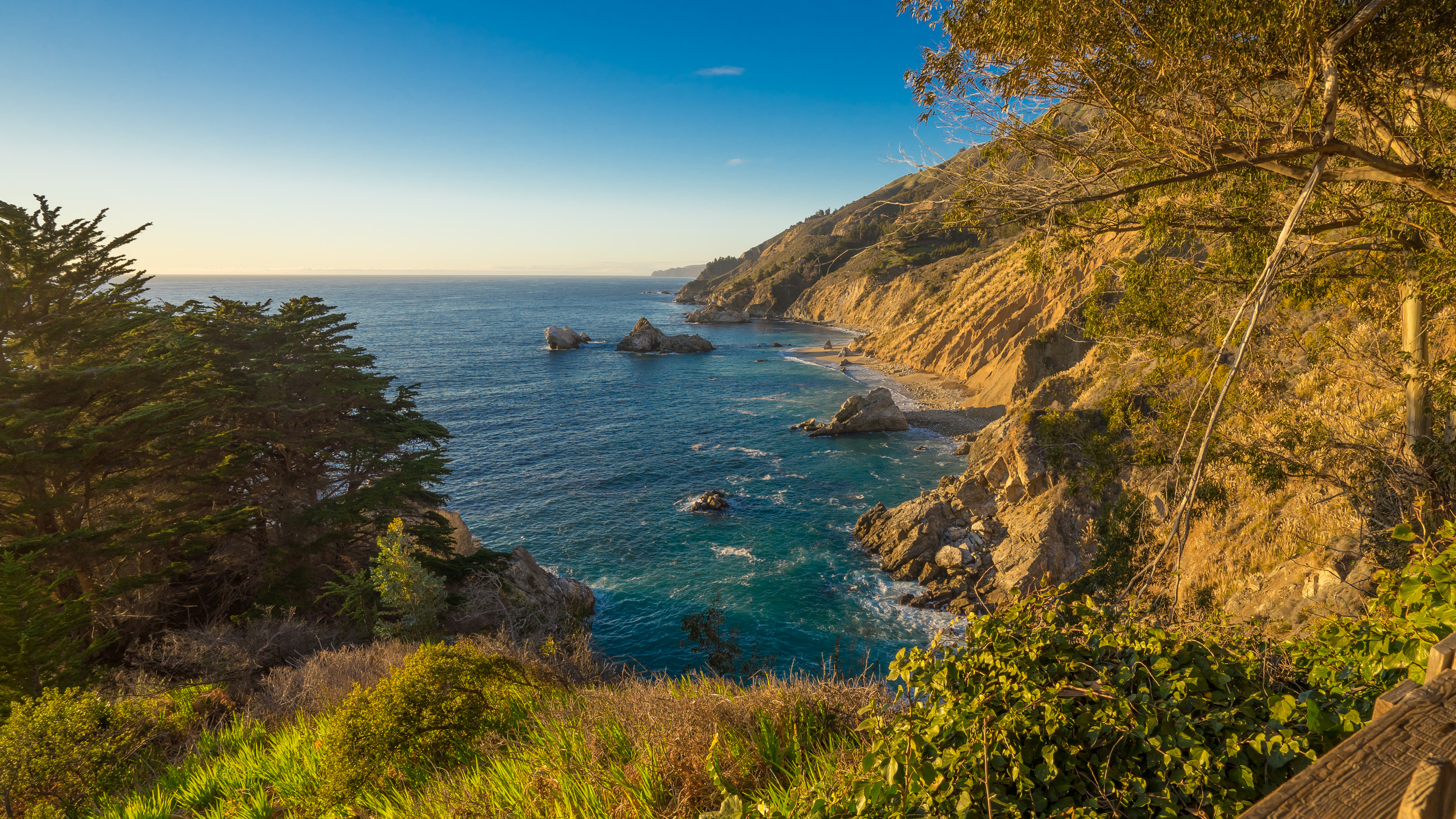 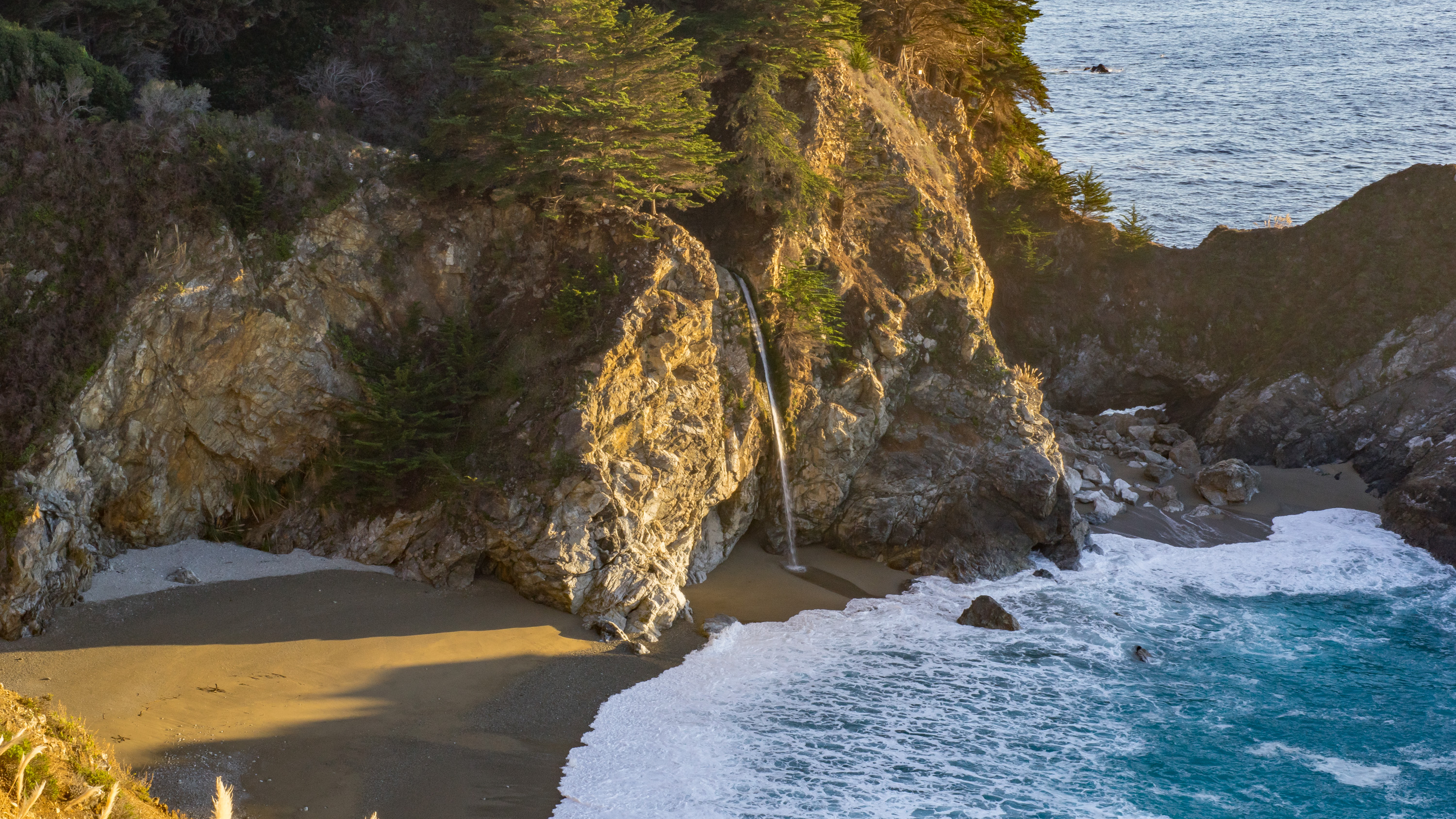 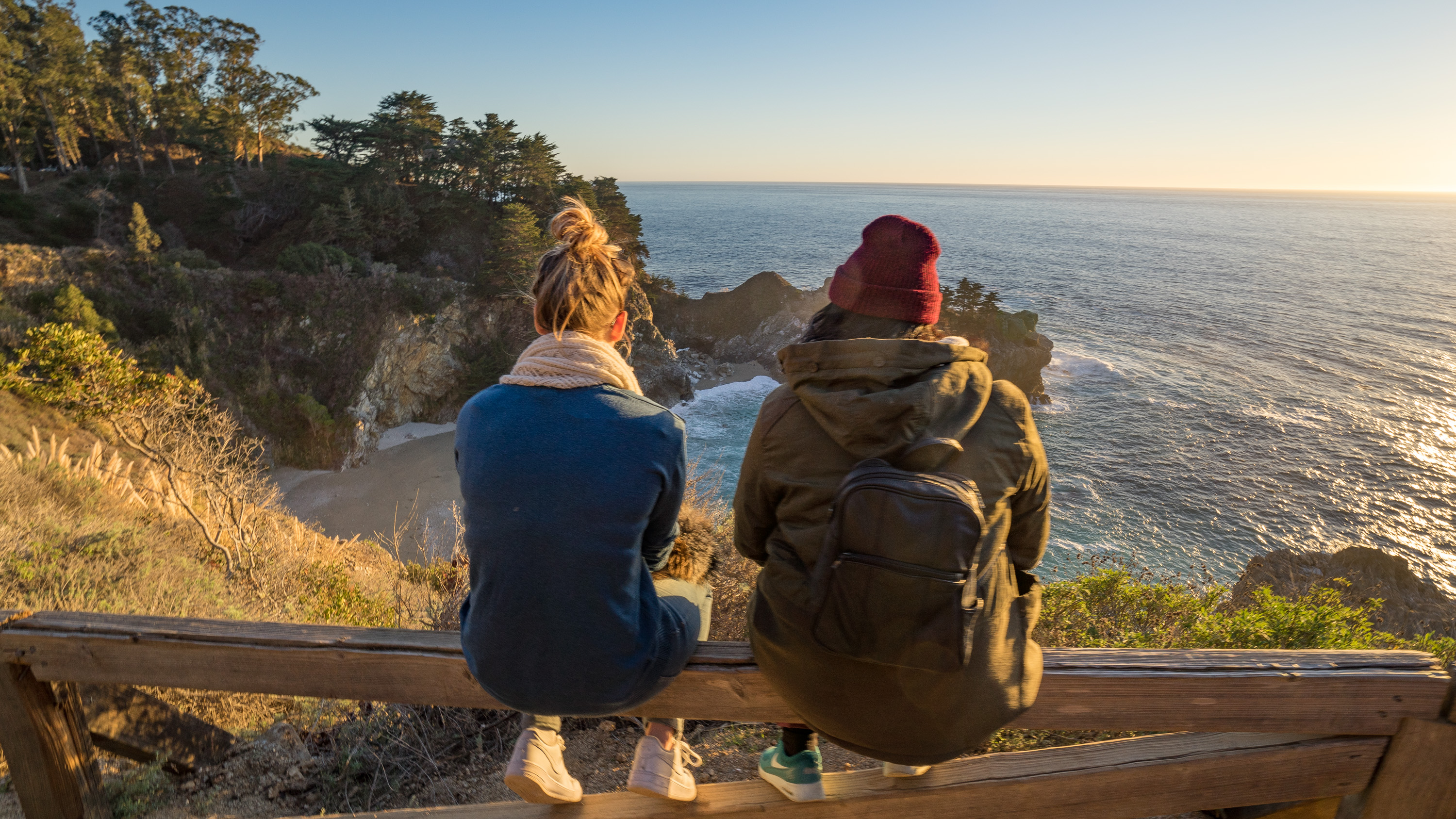 It’s a kind of geologic water park for the ages.

And, as you would expect, it’s a very busy place. By mid-morning on a weekend you’ll need to thread your way through the crowds, everyone with a camera, everyone speaking a different language, everyone stopping along the walkway for a selfie. 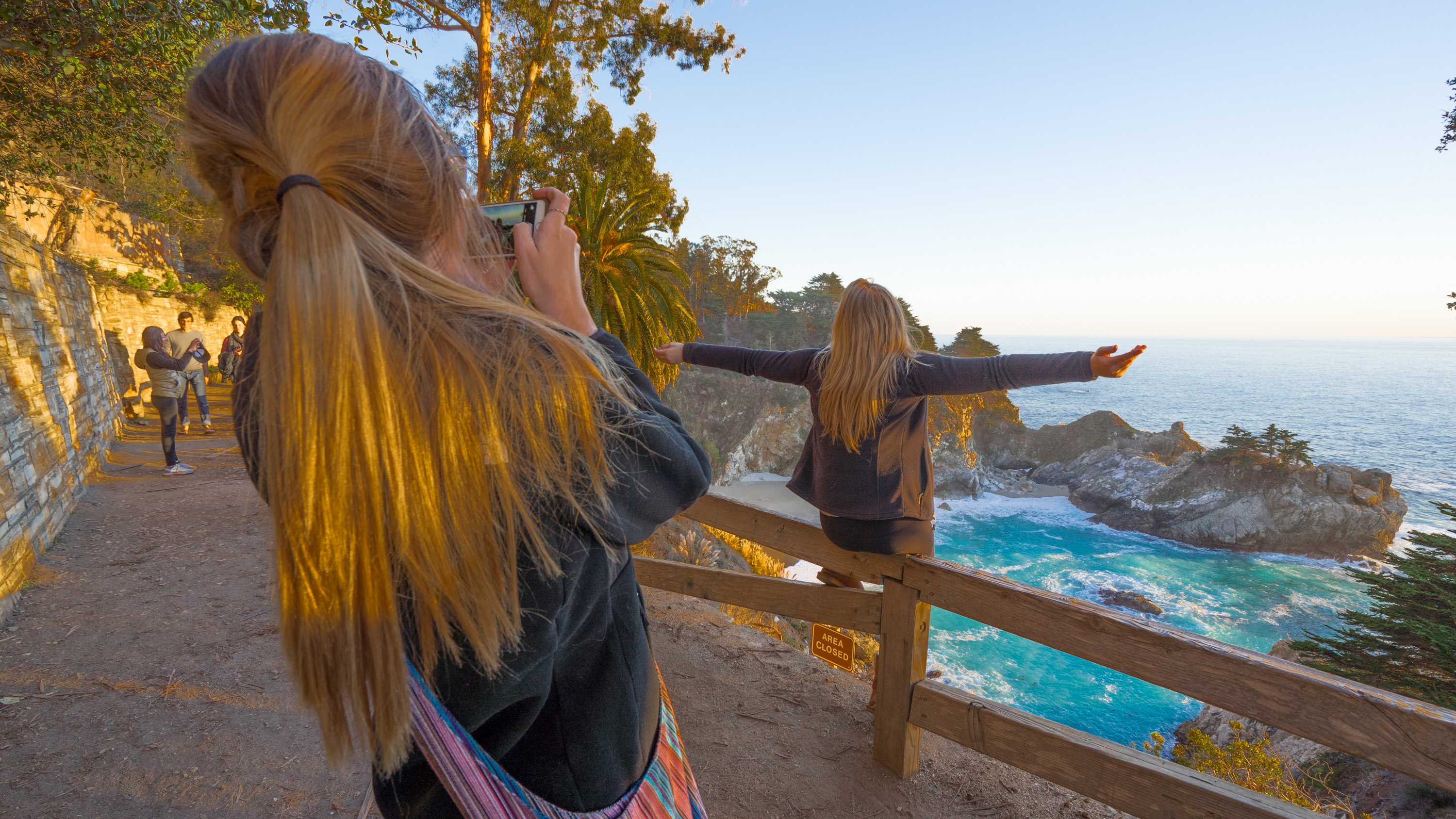 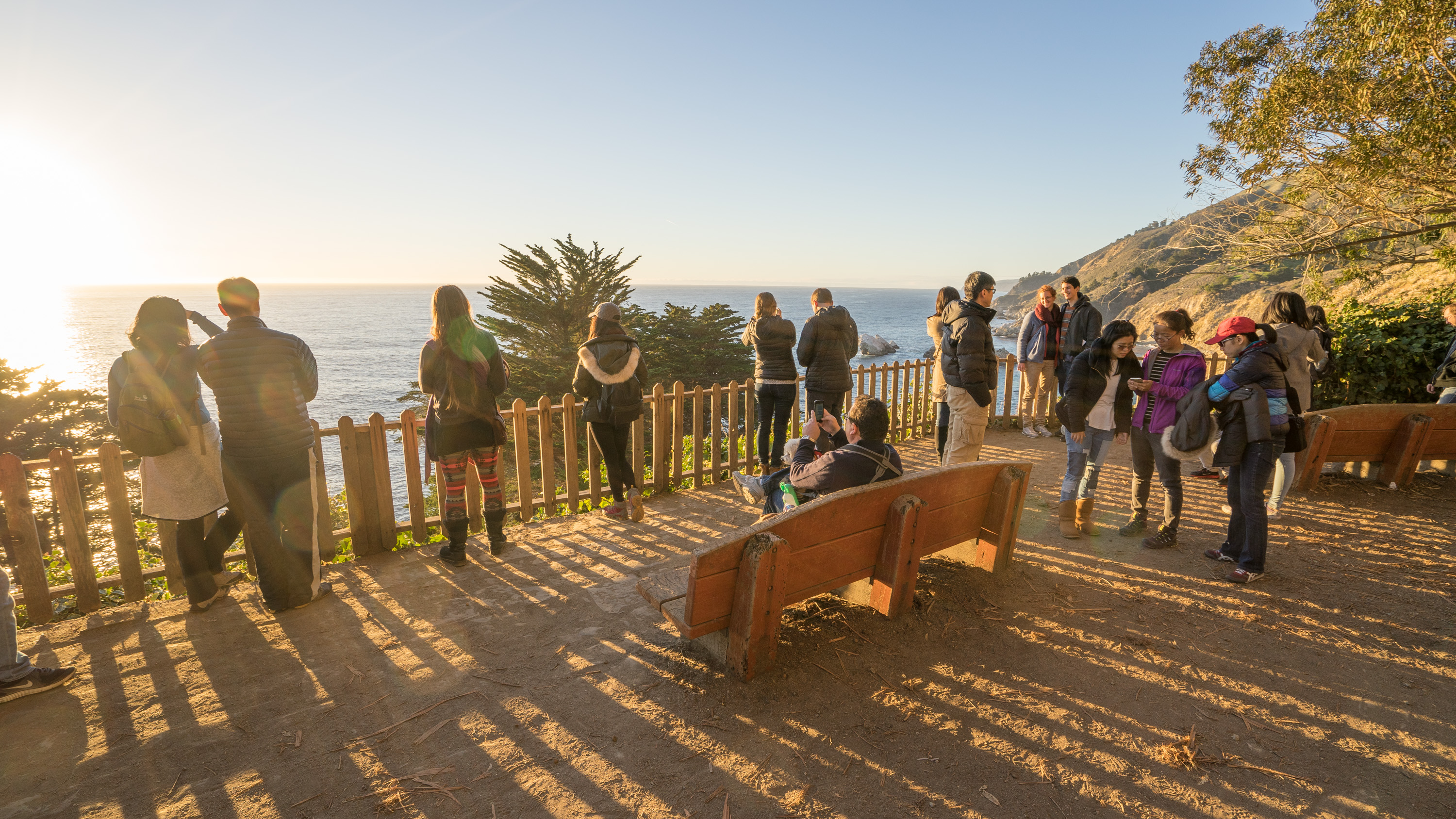 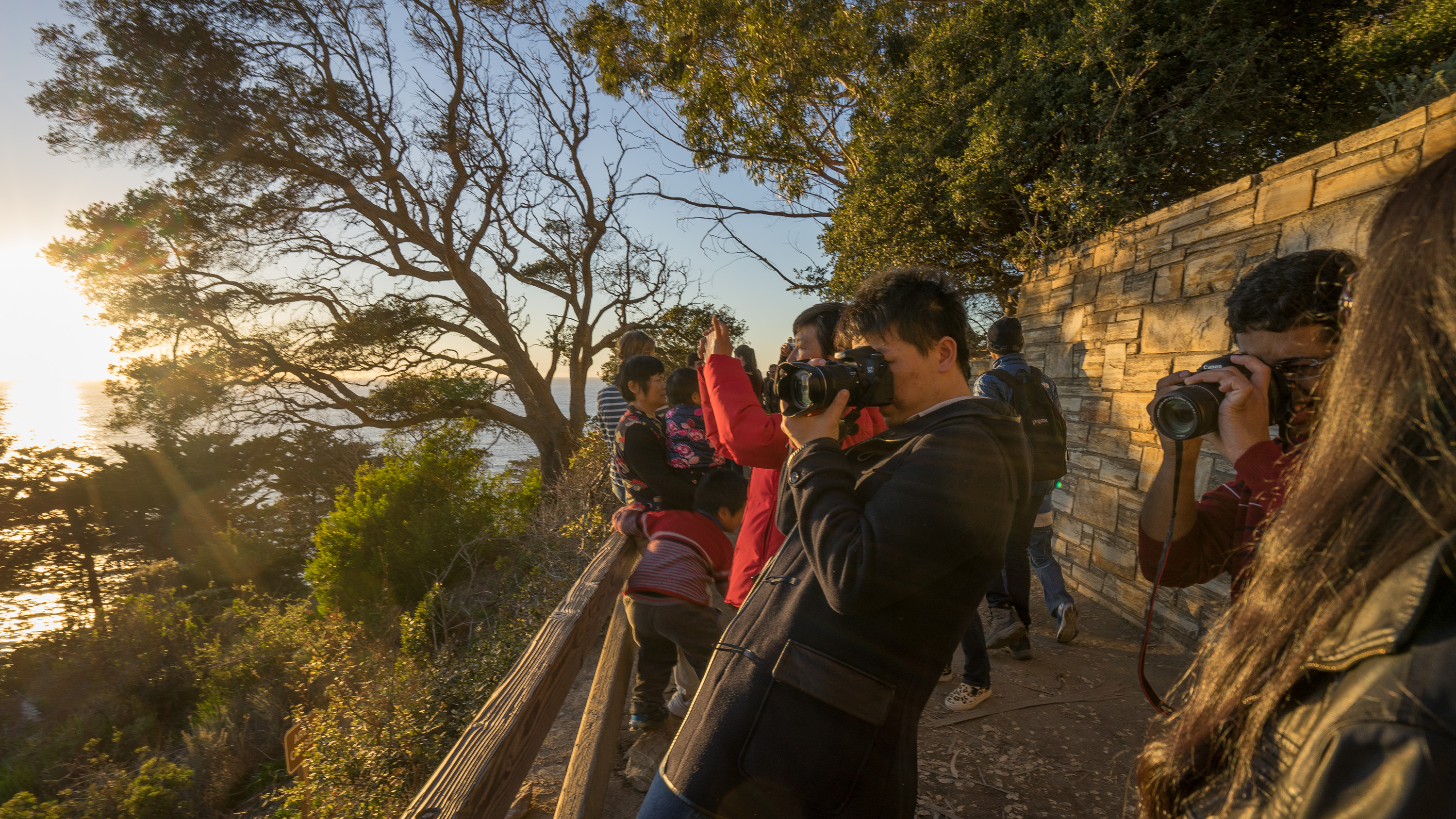 But it’s not all that bad. I managed to get the shots you see here with a little patience; at most I had to wait a minute to get a spot along the rail that had the composition I was looking for.

And if it gets to be too much I have the luxury of coming back some other time; I live about an hour away.

If you’re visiting however, do yourself a favor and get down here early. You might get a slot in the limited parking lot, or if you have to park on Highway 1, you won’t have to walk too far along the roadway, which has, on occasion, been deadly to pedestrians. 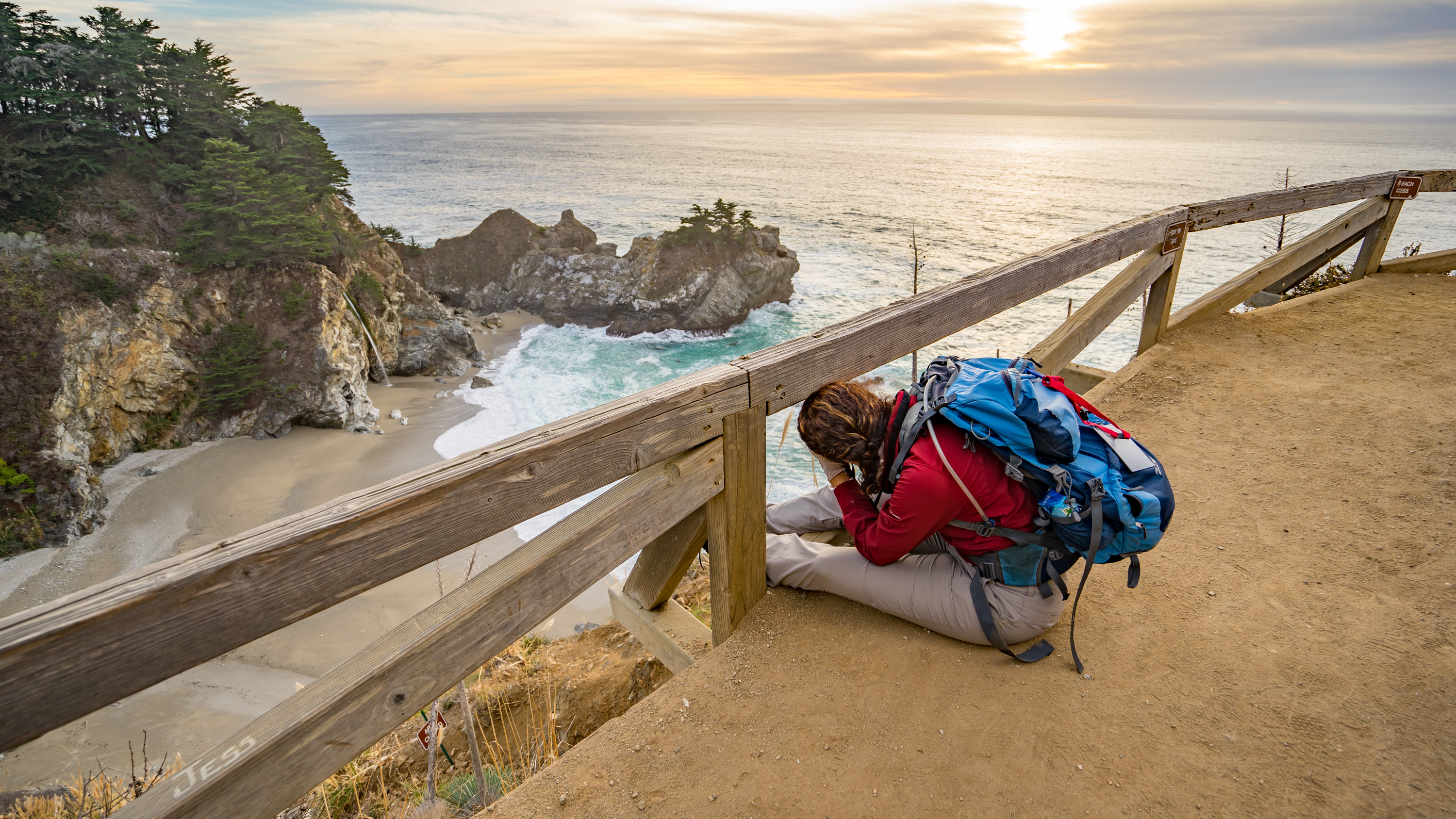 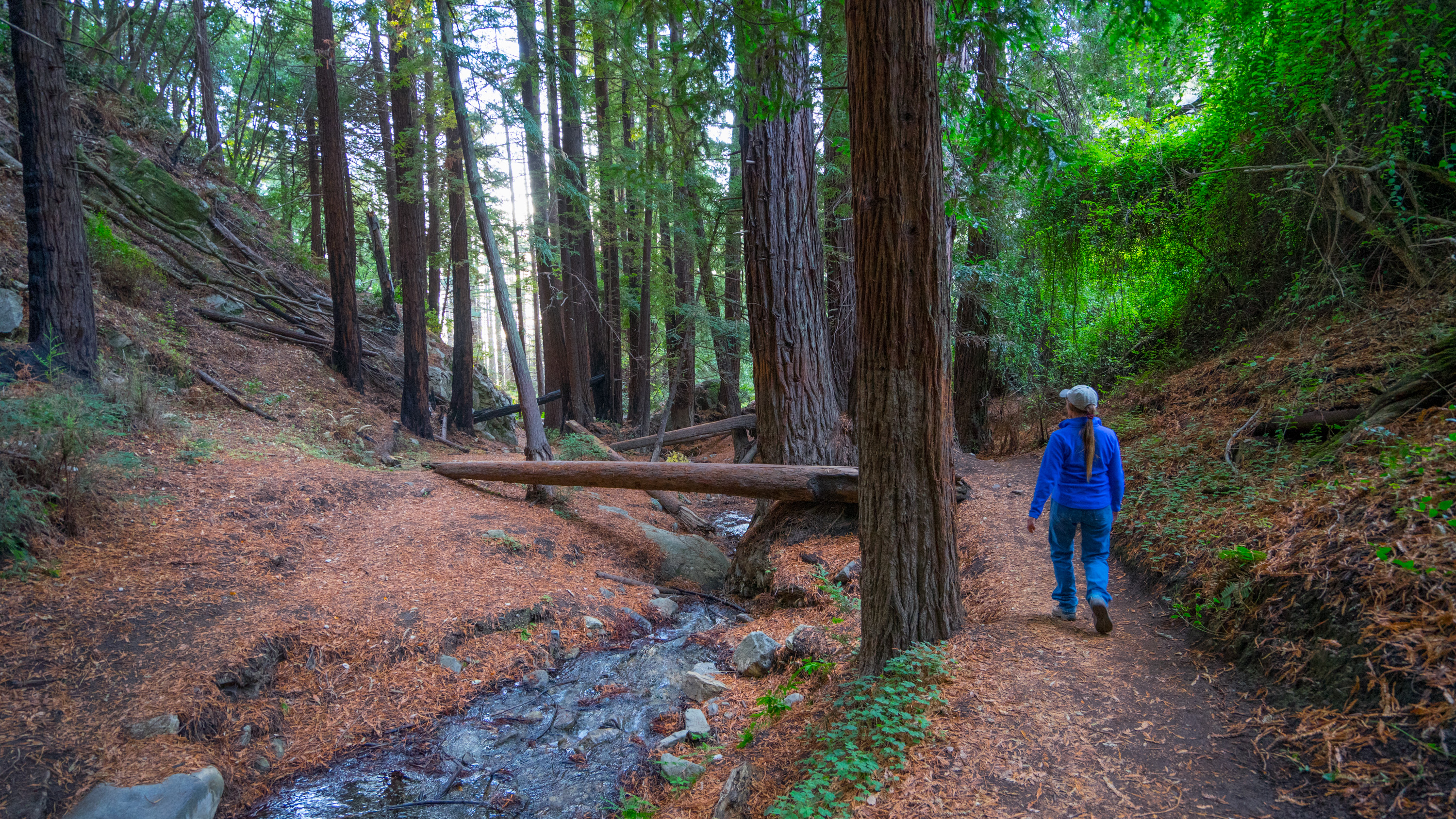 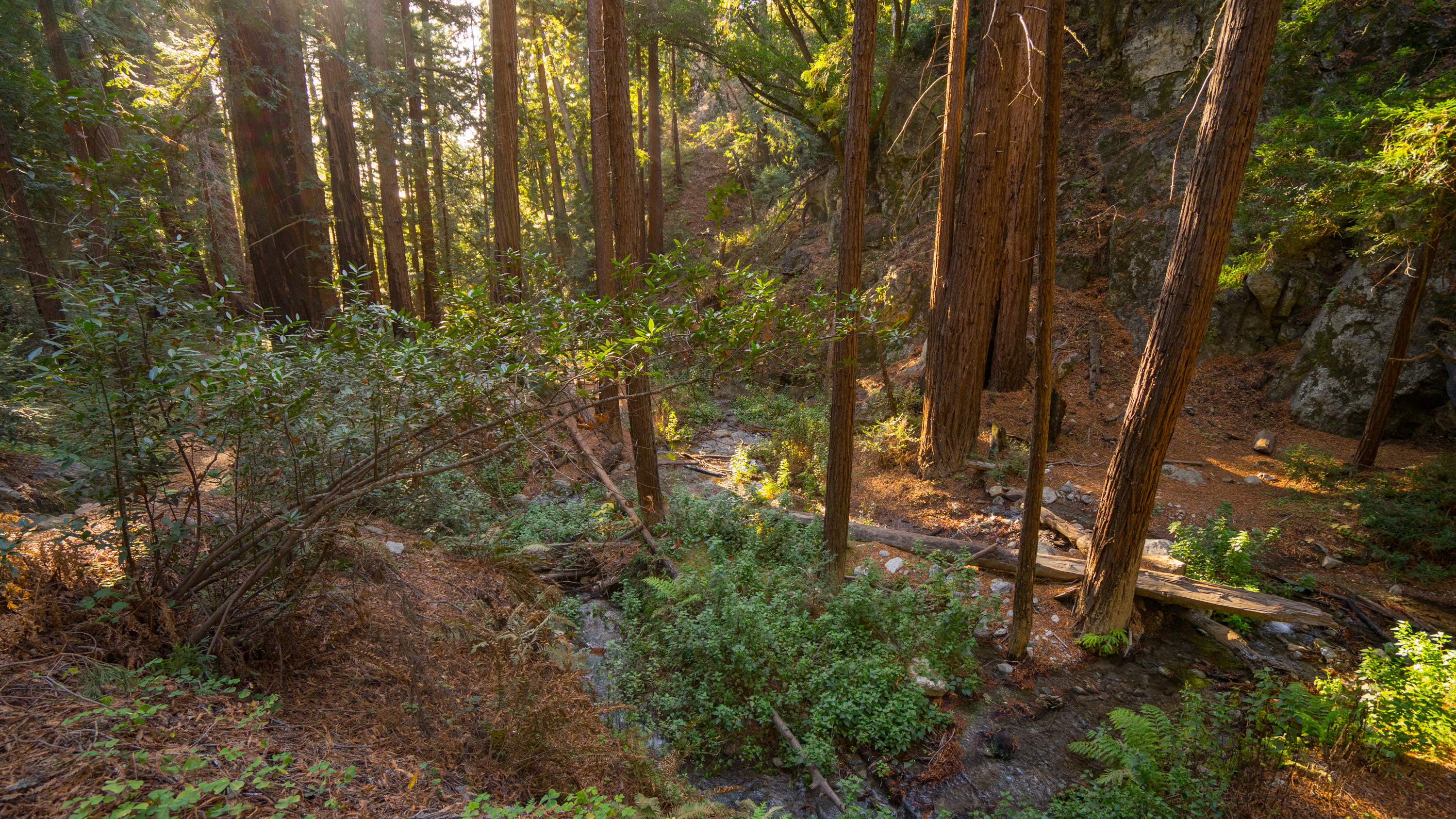 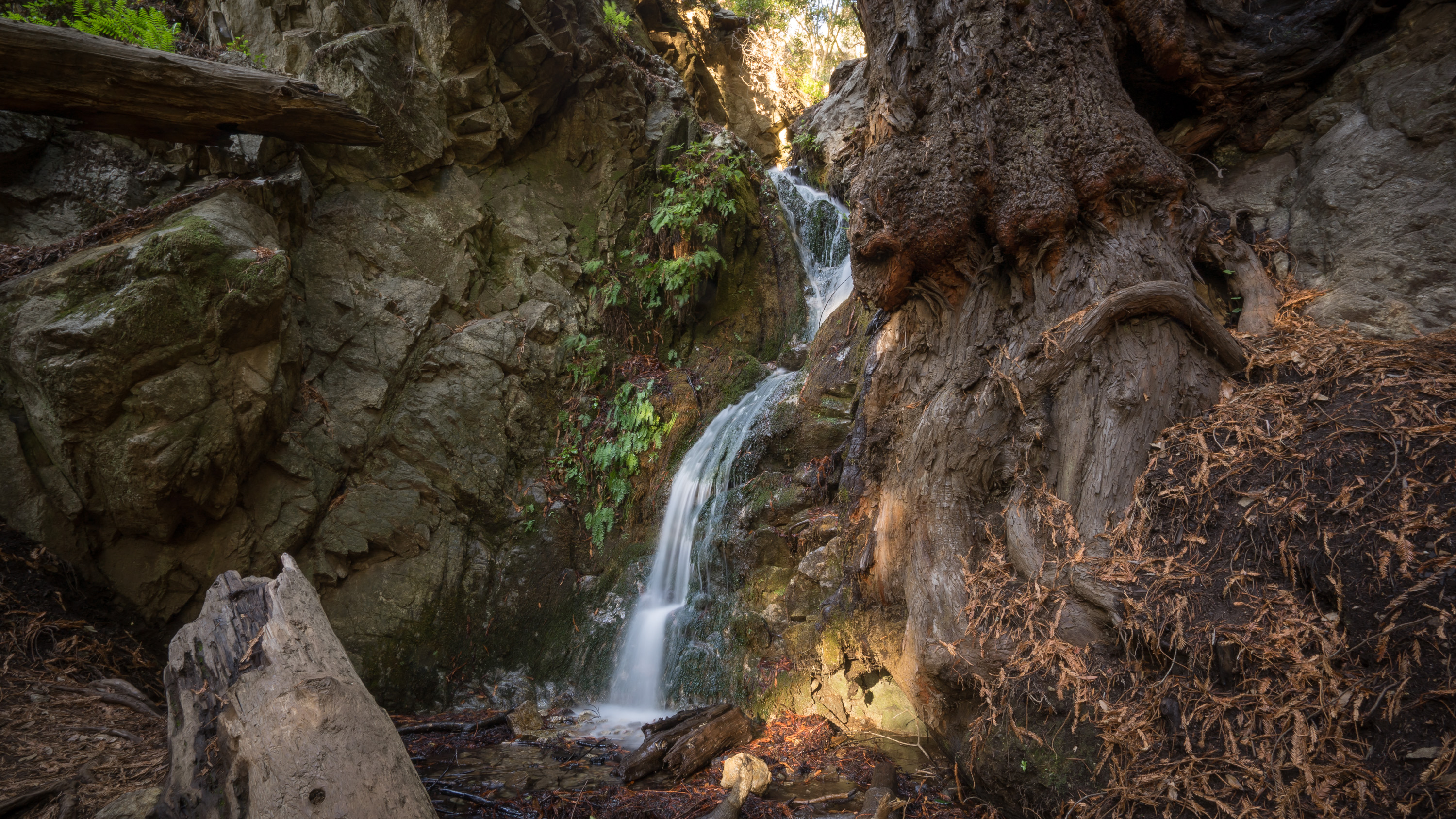 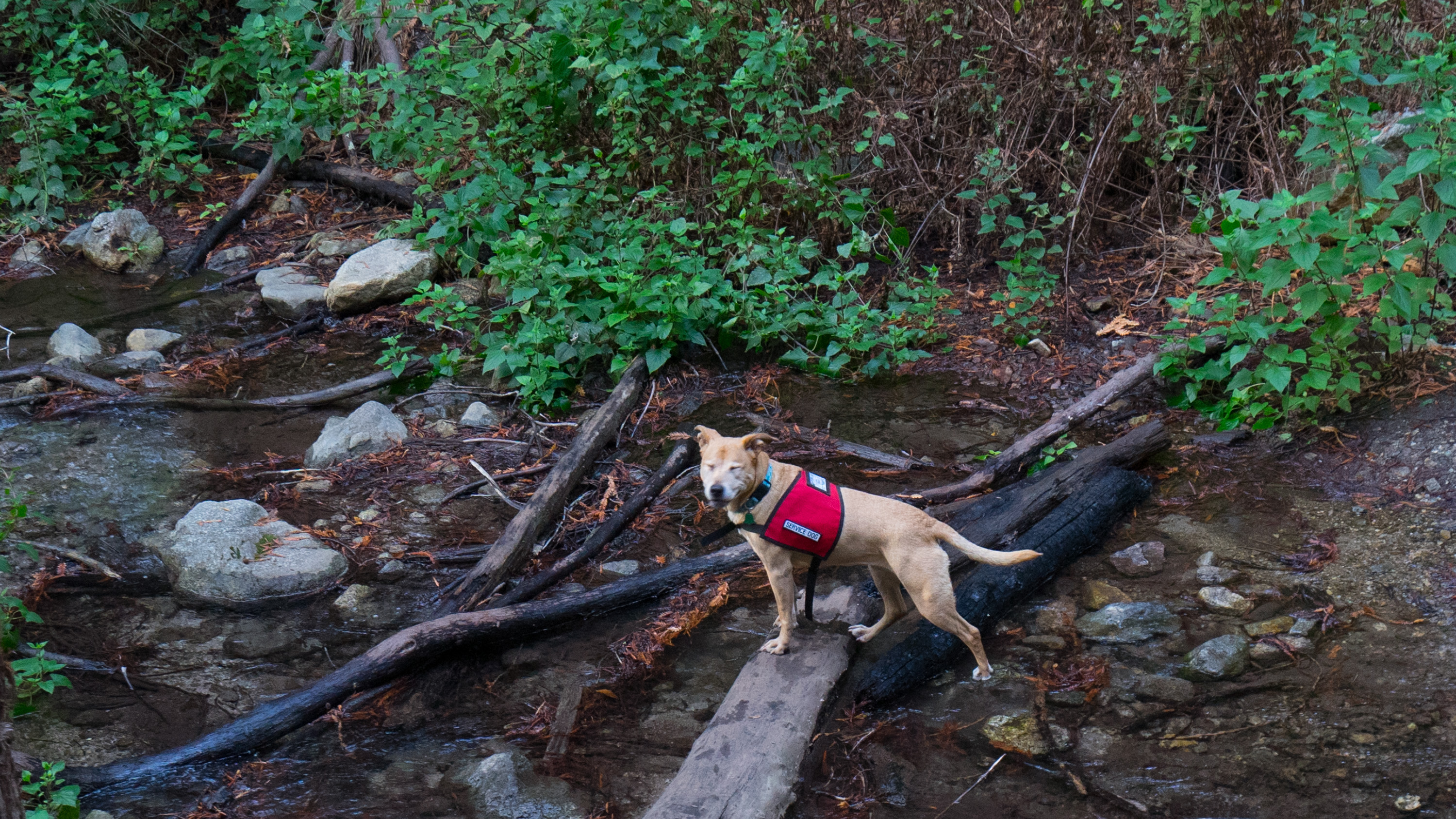 And while McWay Falls is pretty special, make your visit worthwhile by going upstream along the Falls Trail. This is a short (3/4 mile) trail through the redwoods that winds along the same creek to the small Canyon Waterfall. It’s an easy hike to the sound of water in the creek that’s a quiet relief from the noise and crowds clustered along the highway.

The Falls Trail is also where you can pickup the Ewoldsen Trail, which is roughly a 4 mile loop that climbs 1400 feet to some pretty spectacular views of the coastline below. 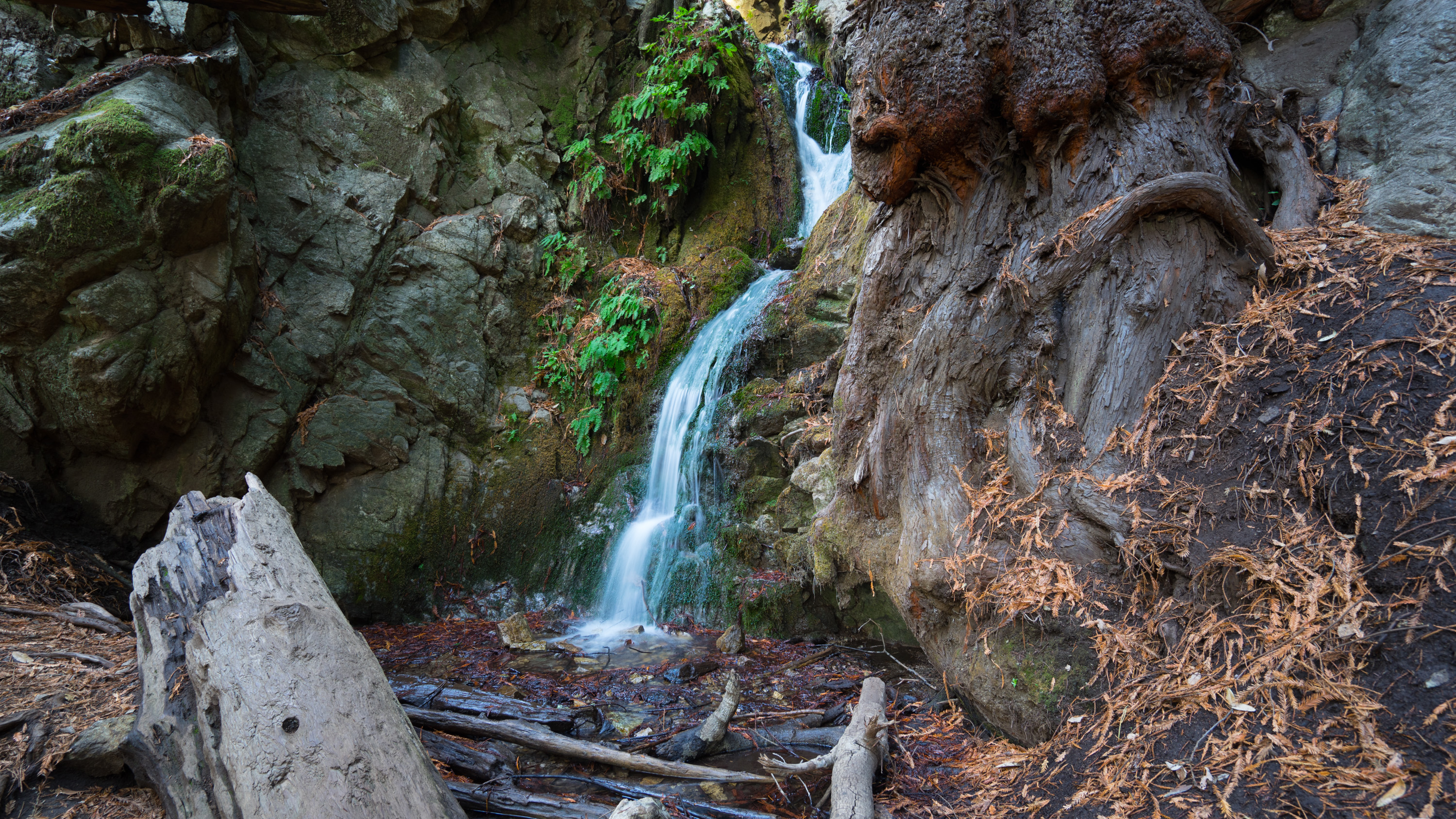 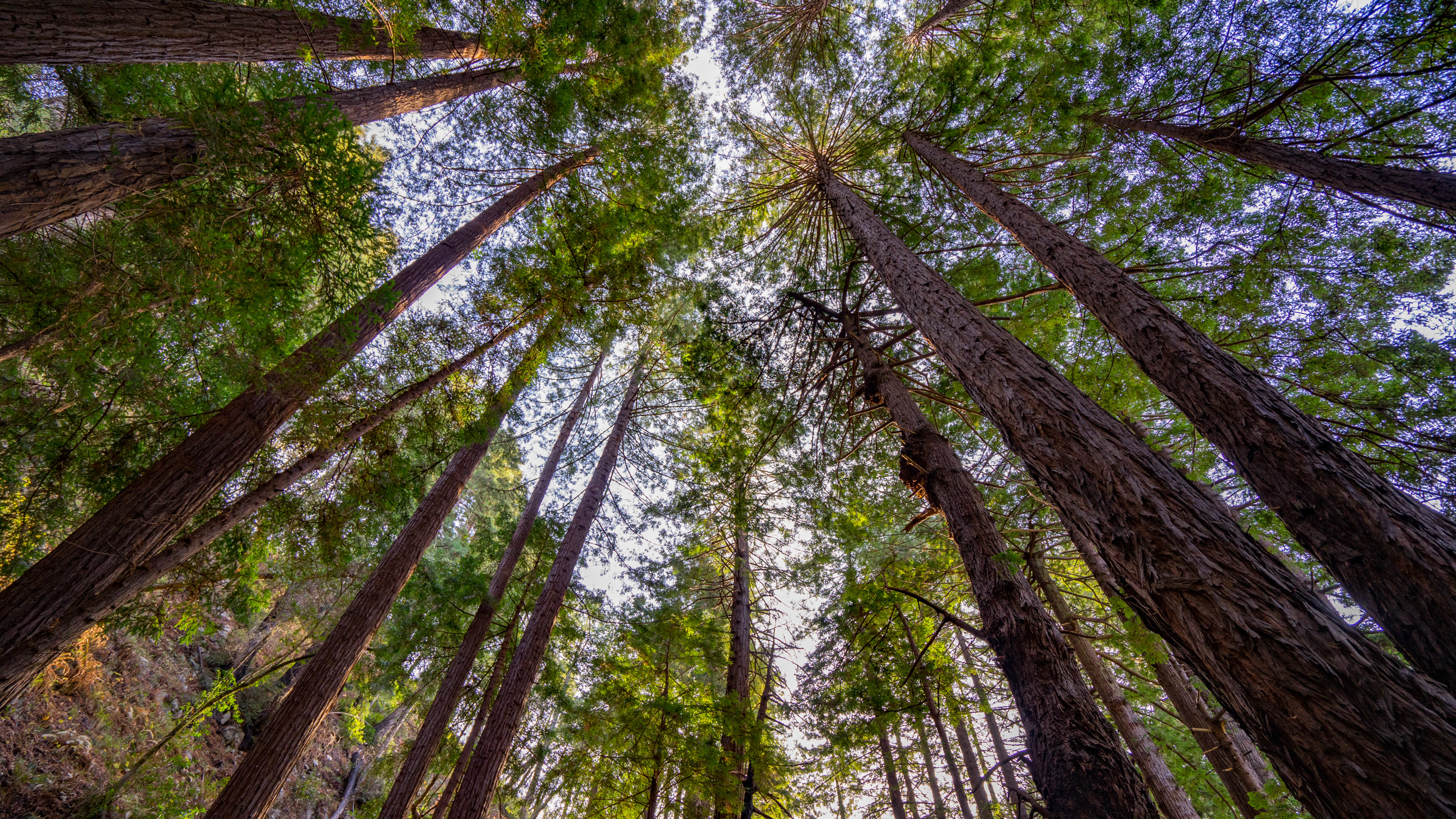 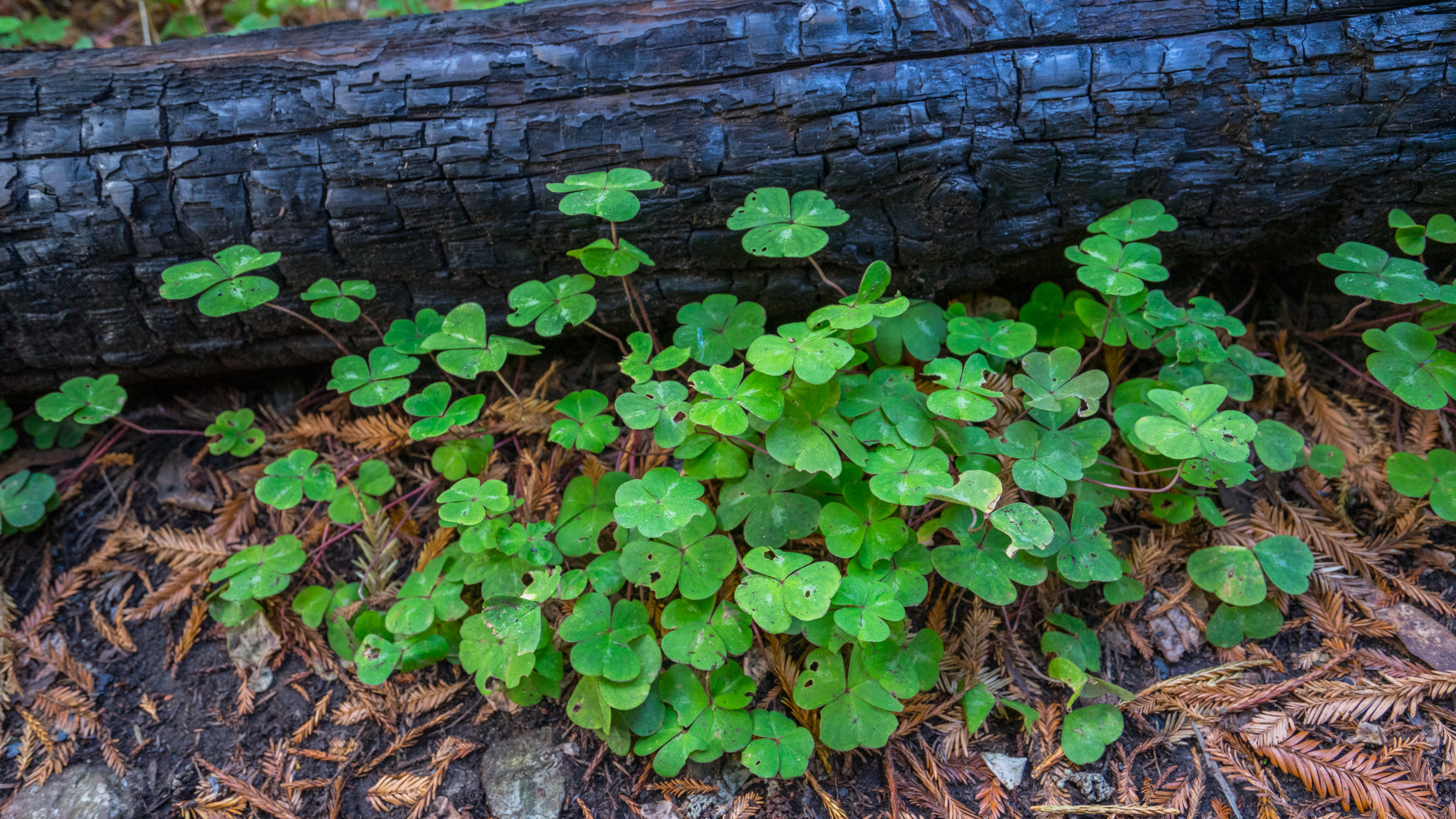 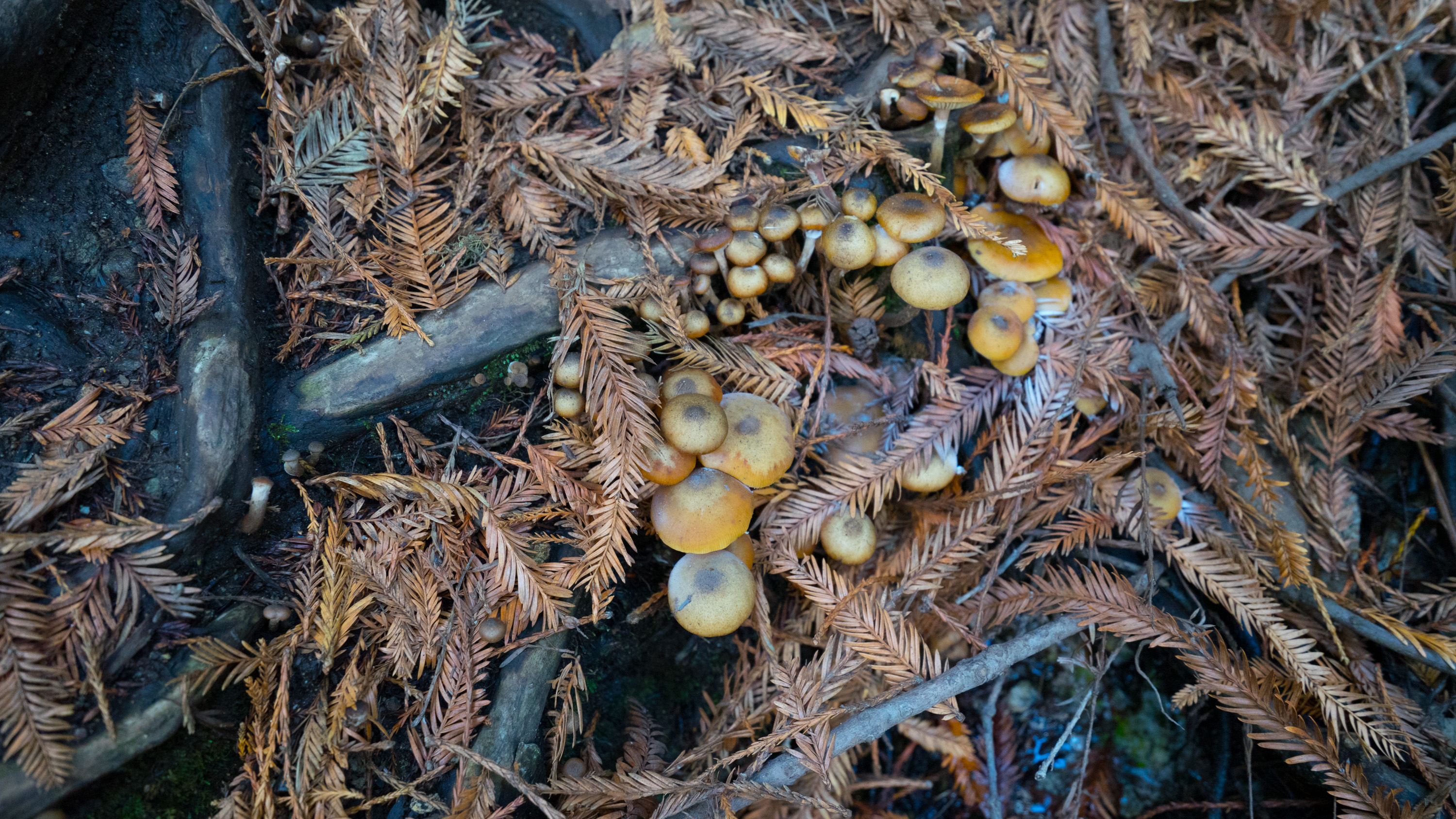 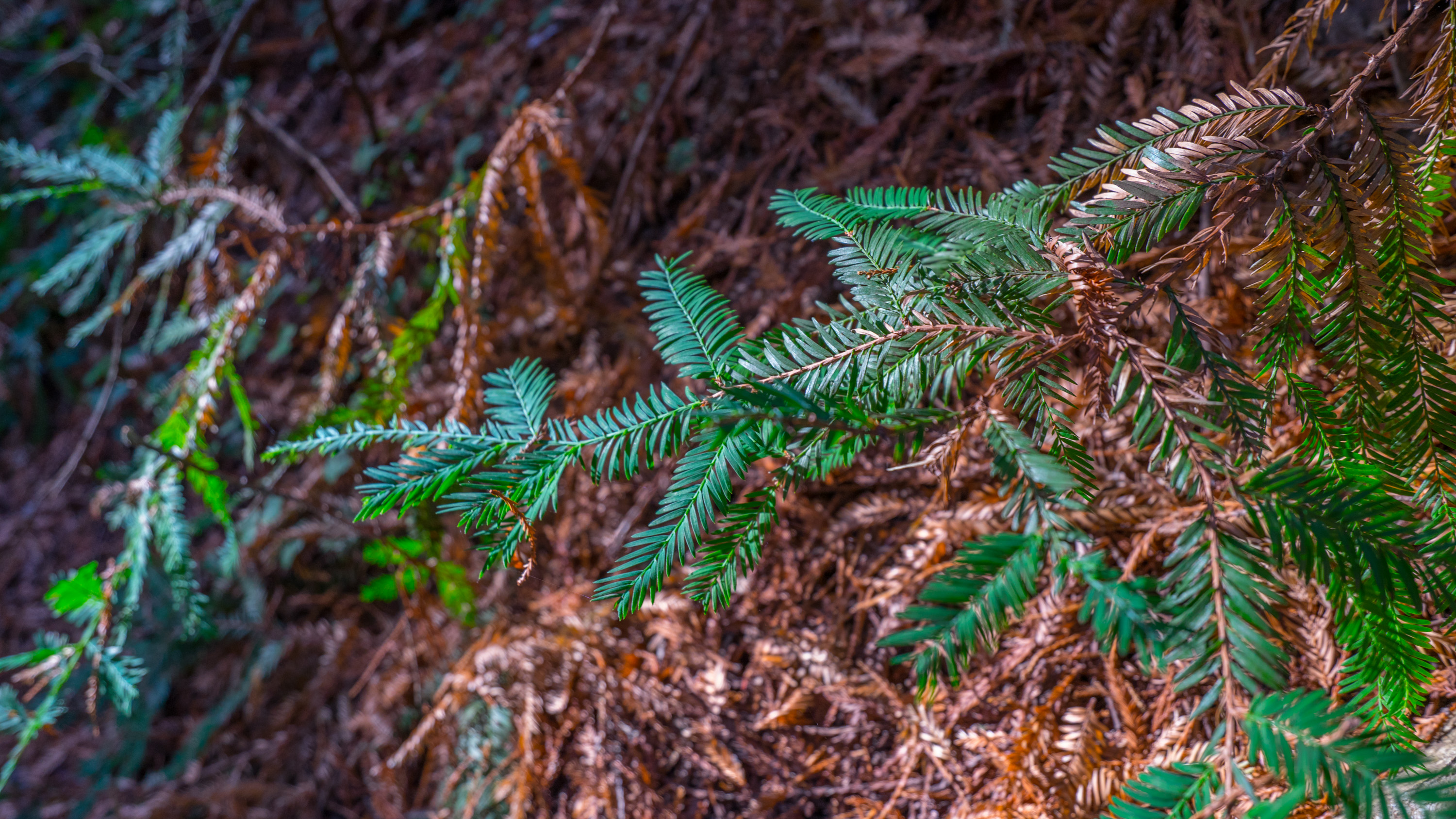 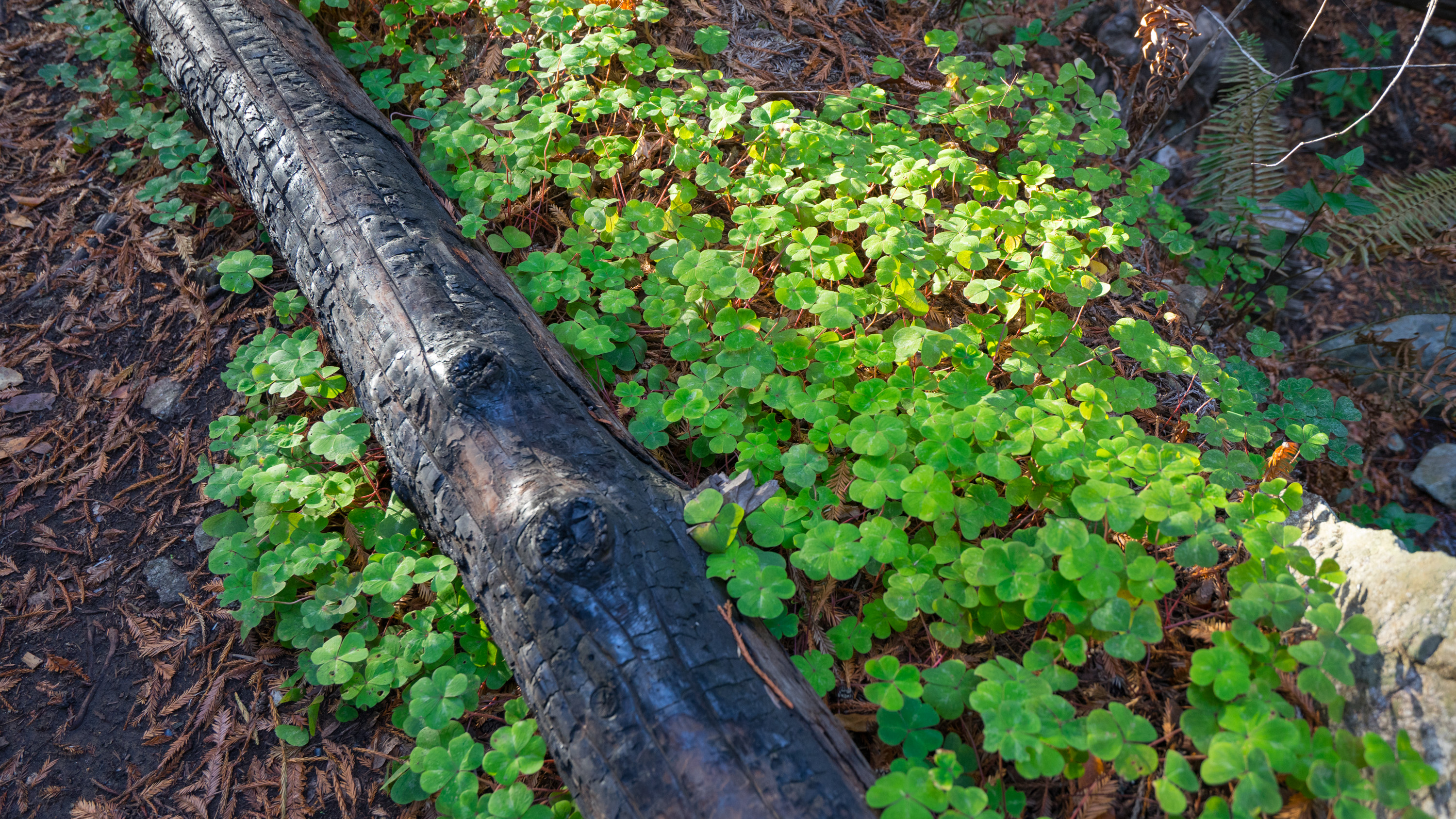 I made a big day of it; I grabbed one of the last slots in the parking lot at about 10 AM and spent a couple of hours hiking the Ewoldsen Trail Loop (which has been closed because of the 2016 Soberanes fire). I then ate a quick lunch, headed upstream on the Falls Trail (also currently closed… sorry) for an hour, and then backtracked under Highway 1 to the tidefall, just as the afternoon light was getting good. The crowds were pretty good, too, but like I said I managed to get some decent shots in spite of the foot traffic.

So, yes, McWay can be crowded and the parking can be a challenge but because of it’s special beauty, it’s worth the effort to see. And you don’t have to go very far to get away from the humans and take in a nice walk under the redwoods.

Photo Factor: + You really must have a decent shot of McWay Falls in your Big Sur trip portfolio.  The access trail keeps you a good distance from the falls itself, so what you’ll get is a wide shot of the entire cove with a thin strand of water somewhere in the shot. If you’ve got a longer lens (some modest telephoto) bring it along to frame up the falls itself. I’d also try and time your visit for the late afternoon, when the sun is lower over the ocean to the west. Then again, the fog just might come in and make everything look like an 18% gray chip chart; tough break. The lower sunlight helps bring out some definition in the rocks, and might throw some light on the falls proper, which would otherwise be pretty flat at midday. If you get there too early for the late afternoon light, kill some time by hiking the Falls Trail through the redwoods to the smaller Canyon Falls.

(-) Shooting in the redwood forest can be a challenge because of the highlights and shadows.  A single RAW shot still doesn’t give you enough latitude to extract the shadows and crush the highlights, so bring the stix and bracket the shots you really want to share with others. Actually, the same is true to a lesser extent with shooting the McWay Falls cove. If you’re serious about that shot, find yourself a spot along the trail (not the boardwalk part; it rocks too much when people walk by), park your stix and bracket the shot. It’s worth doing.

I mean, you came all this way anyway.

Kid Factor: (+) The McWay Falls overlook is OK, but kinda boring if you’re a kid; if you’ve seen one waterfall, you’ve seen them all. So take a look, snap a picture, then head back to the Falls Trail where they can get get into the woods, and into the creek (if you’ve got one of those kind of kids).  There’s plenty of places to scramble around and I didn’t see any poison oak nearby. If they’ve got a lot of energy to burn, take a turn for the Ewoldsen Trail. A few switchbacks will burn off that cola they insisted on having for breakfast.

(-)  If your kid is the kind of kid that climbs on shelves at home, keep an eye on them on the Overlook Trail. There’s a fence and guard rail, but they’re easy to climb over or slip under, and if that happens, things probably won’t end well.

It’s a $400 fine for going over the rail. I don’t know how much they charge for body recovery.

Fitness Factor: (+) The Overlook Trail to McWay Falls is wheelchair accessible, which is great. (Point Lobos also has an accessible trail). The Falls Trail is a pretty lightweight hike, so unless a single flight of stairs gives you fits, this trail should work for just about any fitness level.